posted by: Leo Welder
If you set up your home office incorrectly, “working from home” will instead feel more like “living at work.” I had to learn that the hard way. In fact, after my first home office experience, I vowed never to do it again. Fifteen years later, I finally decided to give it another shot, and, as I write this article from my nearly perfect home office, I can tell you that it has been one of my best decisions. Choosing the space for your office is one of the most critical steps for starting a business, and by following these steps, a home office will become a legitimate option.

I used to believe that the difference between thriving and languishing in a home office was based primarily on the psychological makeup of the person in that office. I still believe there is some truth to that, but now that I’ve experienced both, I believe that the organization of the home office and corresponding work habits play a much bigger role. 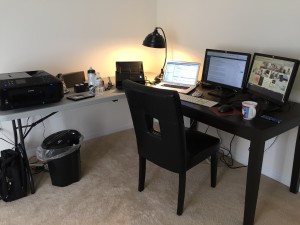 Home Office Away from Home Office: I set up this temporary home office while traveling in Michigan

Here are 25 tips to ensure that your home office is a blessing and not a curse: