If you’re in the market for a tablet, there are plenty to choose from this winter. No sooner did Microsoft release its Surface 2 in October then Apple announced the new iPad Air. While both manufacturers have their loyal followers, does each new tablet have the features and price tag to lure away new customers? We did a side-by-side comparison to see how the two stack up. 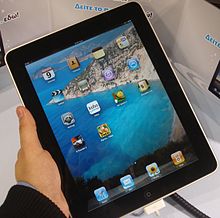 Both are extremely light – the iPad Air comes in at just 1 pound, and the Surface 2 at 1.42 pounds.

The Surface 2 has a larger screen – 10.6 inches as opposed to the iPad’s 9.7 inches. When it comes to resolution, the Surface 2 has improved its resolution quite a bit over the Surface RT. However, the iPad has a lot more pixels crammed into that space, giving it better picture quality.

Both tablets have a similar look. The iPad uses aluminum in its surface, whereas the Surface 2 uses a magnesium alloy; unless you care deeply about what kind of metal surrounds your tablet, there’s not much difference appearance-wise. The Surface 2 also boasts a built-in kickstand that holds it up at two different angles. You can use the iPad’s cover to do the same thing, but you’ll have to buy it separately. Both have keyboard covers you can buy separately, although only Microsoft’s has a trackpad.

Neither the Surface 2 nor the iPad run what could be considered a full desktop. The difference is that you probably didn’t expect the iPad to, whereas the Surface 2 is marketed as a productivity tablet that runs Windows. Unlike the Surface Pro 2, the Surface 2 runs Windows RT 8.1, which is a limited version of Windows. It’s worth noting that Windows RT doesn’t support traditional desktop software. It does offer an Office desktop app, which is something you cannot get on the iPad. Apple instead offers its iOS version of Office, iWork. Both iWork and Office 2013 RT are included on each tablet.

Apple wins on the sheer number of apps you can buy from its store – more than 475,000 tablet apps, compared with about 100,000 from the Windows store.

Microsoft uses Tegra 4 32-bit processor in the Surface 2, which performs well. It comes with 2 GB of RAM. Apple uses the A7 64-bit processor, which by all accounts is faster-performing, and offers 1 GB of RAM on the iPad Air.

When it comes to storage, the Surface 2 gives you more for its entry-level model. It offers 32 GB at entry level (you can also purchase a 64 GB model), compared with the 16 GB entry-level iPad Air, although you can purchase the iPad Air in 16GB, 32GB, 64 GB or 128GB. The Surface 2 also lets you use a microSD card.

Both Apple and Microsoft estimate that their devices have about 10 hours of battery life.

The Surface 2 starts at $450, and the iPad Air starts at $500, not including extras like keyboard covers.