Everyone has deadlines. Everyone has been told that they need to finish tasks or projects—or to deliver a product—faster than they’d planned. It often seems impossible to meet these deadlines, but there are ways to get the job done. Knowing how to properly crash a project is a vital tool for any project manager. But, for project managers, it is also one of the most difficult things to do. “If something takes Karen six days to accomplish on her own, then Karen and Peter working together should be able to accomplish this task in three days. But, this is rarely, if ever, the case,” says Nick.

“Tasks can always be done faster,” says Nick. “It’s just a matter of: How much extra will it cost? How much faster can it get done? Who will be working on it?” Answering these questions and putting plans in place to execute your objectives will help make the impossible possible.

According to Nick, there’s always a risk of decreasing the quality of your product when you crash the project, but you should have a solid plan in place to help you minimize the loss of quality. “I wouldn’t recommend crashing the project unless absolutely necessary—which is often the case for small businesses,” he admits.

Breaking down tasks from a few big picture accomplishments to several smaller, more tangible pieces can help a project manager better organize and prioritize tasks. Work breakdowns also help to identify which steps can be accomplished at a faster rate than others with minimal cost (i.e. only a few additional resources are necessary, and there is little to no learning curve). Nick also advises PM’s and teams to identify tasks that can be done in parallel. For example, instead of doing Quality Control on all of our vendor reviews before we publish them on ChooseWhat.com, we upload reviews that have already been quality checked while other reviews are being QC’d. This makes the process faster and much more effective.

Create a Networking Diagram to Identify Your Critical Path

The following diagram (drawn by Nick) shows the critical path (green) to completion of the project (yellow). The numbers denote hours of work allotted to each activity. Totaling hours on the critical path will give you the longest (read: actual) timeframe for completing the project. 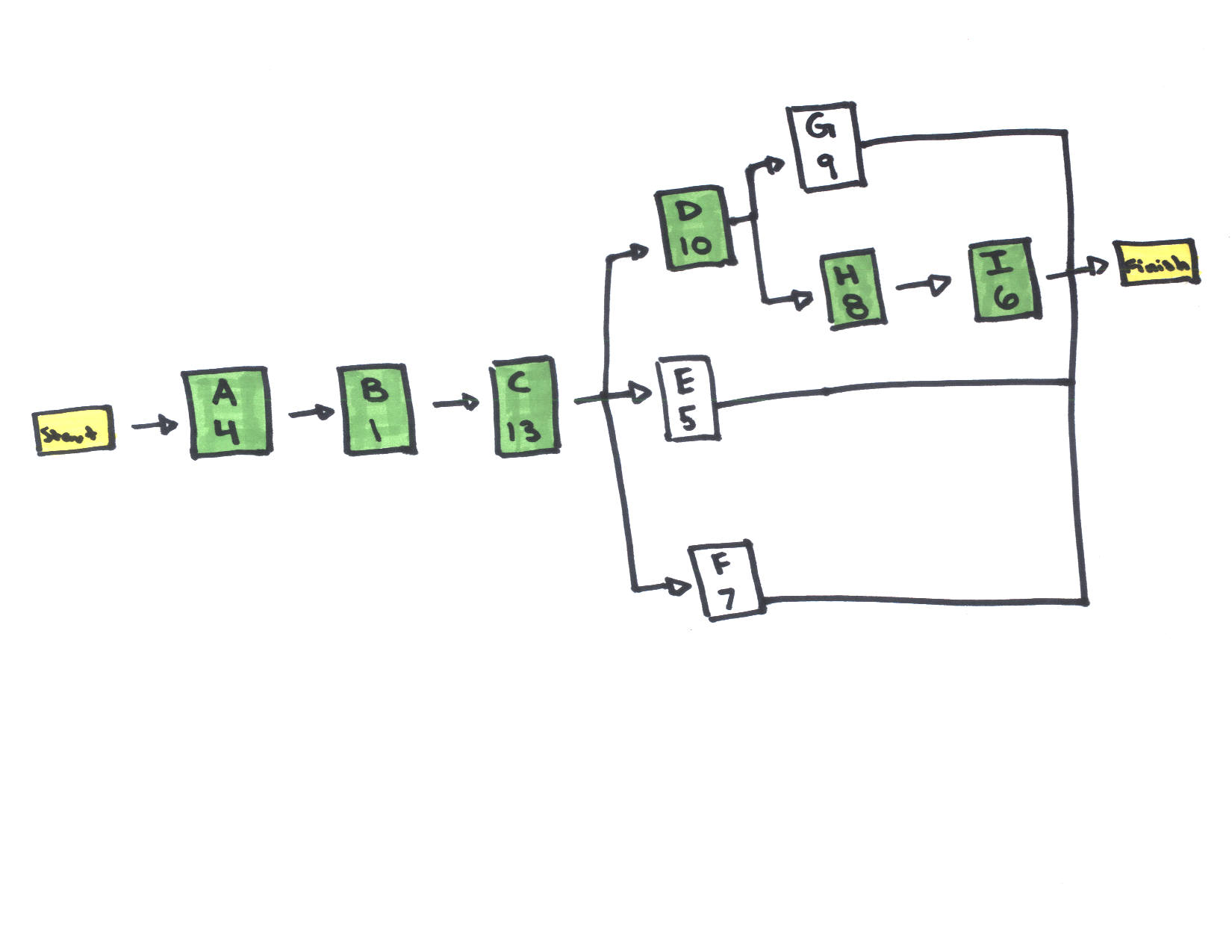 Crying Gets You Nowhere

“Getting told that a project is due sooner than expected is not the end of the world,” Nick admonishes. “Be creative, and come up with a solution because crying gets you nowhere!” Your solution is going to involve plenty of graphs and flow charts that will help you get a firm grasp on realistic goals and work schedules, as well as your own judgment on how to utilize resources.

“Crashing the project—and managing projects in general—is both an art and a science,” says Nick. The “science” part, he says, involves graphs and numbers.

The “Science” of Crashing

For instance, you have 10 workers, and each worker on this project costs the company X number of dollars per hour (we’ll say $20), and the project is due in four days (with eight hours in a day), you are going to spend $6,400 in labor costs. Just before you start working on the project, your superior tells you the project must be done in three days.

As project manager, you decide that if you’ve got 10 workers (working eight hours per day),  and you need to speed up the project by three days, you’re going to also need to increase your workforce by five people. The project manager then can report to their superior that they can in fact speed up the project to be done in three days, but it is going to cost $800 extra (15 workers x 8 hours a day x $20 an hour x 3 days). It is then up to the person who is funding the project (or your superior) to decide whether the $800 extra it would cost to finish the project one day earlier is worth it.

The “Art” of Crashing

The “art” part involves your skill at putting all your resources in the right places.

“We wouldn’t want April (our Web Developer here at ChooseWhat) to be working on a research database when Casey (one of our researchers) can do it much more efficiently,” says Nick. “And we wouldn’t want April spending all her time teaching Drupal (our Content Management System) to Casey.”

But, he admits that a little bit of training is often necessary to enable the handing-off of tasks. (In our case, a 30-minute training session on Drupal sufficed.)

This is the end of your crash course in “project crashing.” Just remember that rushing to meet a deadline doesn’t mean you have to feel frazzled. The more you plan for the crash, the softer it’ll be.