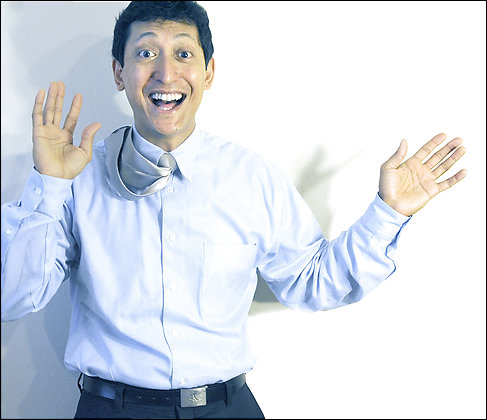 What did you do before you started your career as a comedian and how did you feel about your work?

I worked at Intel Corporation, and my job was to travel the world and speak on stage doing technical demonstrations with the senior executives of Intel. They’d be doing a speech and they would call me up and I would demonstrate the latest technologies. So, I would design these demonstrations in the lab, in conjunction with the executives, and then present them onstage at events all over the world—Thailand, the south of France, you name it. And the tough part was not the technical part but the speaking on stage in front of thousands of people—sometimes millions of people on television. It was terrifying! And that drove me to take a comedy class to get over the fear.

People had always told me I was funny, so I thought if I take a comedy class and do well at that, then it would be easier to speak on stage. I’ve always believed that if you want to do something difficult, then do something that’s even MORE difficult. Then the difficult thing becomes less difficult. For example baseball players practice with a golf ball; basketball players use a hoop that’s much tinier than a regular hoop. So I thought, “Hey, if I can do comedy, then the speaking on stage will be much easier, and that’s exactly what happened!” So if you want to do something difficult, do something that’s even more difficult.

I’ve never heard that before. That’s such a great tip for success!

I think it was Mark Twain who said, “Do what you fear and the death of fear is certain.” I love that and I try to live my life that way. I was afraid of water so I took a scuba class; I was a bit afraid of heights so I bungee-jumped and I sky-dived.

When and why did you decide that you wanted to leave your presumably secure and lucrative job at Intel to pursue a really risky career as a comedian?

Well, these are the kinds of things that don’t just happen overnight. It’s a process. I asked a comedian: “How do you come up with jokes?” And he said, “Whenever you hear or think of something funny, write it down right away.” So, I’d actually been writing, jotting things down, for two years before I went to my first comedy class. So I had this stack of index cards with all my jokes and I just started telling them. And people laughed at everything!

Then the second class nobody laughed at any of my jokes and I was so bummed out! There have been three times in my career when I thought about quitting and that was one of them. I thought: “I’m no good at this!” But I didn’t quit and obviously I’m glad about that.

The final exam of the comedy class was an actual performance at a real comedy club, our friends and relatives were invited. I was terrified! So I rehearsed my lines over and over and over and over until I knew my act cold. And I went on stage, and it was totally packed. And I did really, really well!

I had made a tape and I showed it to my co-workers at Intel and they asked me to do a show at the annual sales conference with 2,500 Intel salespeople from around the world. And that was amazing. I brought the house down at that show! People were pounding on tables. And people came up to me afterwards and said, “You’re not really an Intel employee—you’re a professional comedian hired to pretend you’re an Intel employee.” That blew me away! And that’s when I thought, maybe I could do this for a living….

And how much longer was it before you did start doing it for a living?

Oh, it was a while. I came to the realization that I had to be in New York City or Los Angeles, so my strategy was to try to transfer to an Intel job in New York City. So I did that and I moved to New York. And the new job was nowhere near as fun and geeky technology-wise as my first job at Intel. So after a year I decided to leave Intel. And everybody thought I was out of my mind!

Then I started taking a comedy class in New York, which I still go to when I’m in town, with an incredible teacher. The first money I ever made doing comedy, I had to stand in Times Square and pass out tickets to a show, and I would get one dollar for every person that showed up. And five people came, so I made five dollars.

Wow! So during that time between when you quit your job at Intel and you started being able to make some money as a comedian, how did you keep going?

It was tough. When you’re in show business, there is no clear path to success. Everyone approaches it differently. The only thing you can do is work. I just took my class and performed as much as I could.

So once again, hard work prevails. 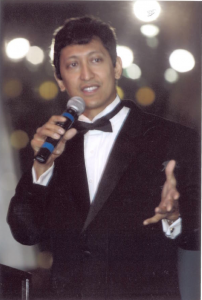 lk to anyone who is successful—athlete, entertainer, whatever—it is 5% talent and 95% hard work. It’s all about working really hard.

So, I’m curious. What were some of the comments you heard when you told people your plans?

Everyone told me comedy is really hard and competitive! There are so many people who will discourage you! I was dating a girl, early in my career, and she said, “When are you going to get a real job?”

Ironically, I went to a party full of journalists and three people in a row said, “It must be hard to make a living as a comedian.” And I’m thinking—okay—these are journalists, who aren’t exactly wealthy. And finally when the fourth person made the same comment I said, “You know, I sometimes make $20,000 for an hour show. Okay?”

There are so many people who have dreamed about doing their own thing and were too afraid to do that. And it’s really sad I think. I meet a lot of people who started their own company, and some of them have gone on to become multimillionaires.

Here’s the thing: You will hear it from all sides: “You shouldn’t do it. It’s too risky! You don’t want to have a hole in your resume! What if you fail?” And someone told me something very interesting: These are people who were afraid to go out on their own, and they are validating their own poor choice.

So, what if I came to you and I said, “Dan! I want to follow my dreams, but I’m getting a lot of push back from people around me and I’m afraid.” What advice would you give me?

I’d say: Don’t be afraid; don’t listen to them. You might want to say, “Oh, maybe you’re right,” and let them believe that they’ve persuaded you not to do it. And then do it anyway!

It will require a lot of work, and most of it will have to be done around your nine-to-five job for a while. And here’s the thing: People say, “Well, I don’t really have time to write my book or my songs or my jokes.” But you do! The average American watches 32 hours a week of television. You could use those 32 hours, instead of following Game of Thrones, or whatever, to do your thing.

There’s also a tremendous amount of pressure to go out drinking after work on Fridays, and then you’re hung over the next day and can’t do anything that requires creative thinking. But if you don’t do that, I just found you all those hours that you can work on your craft!

So I would say, use your time wisely. Turn the television off and do the work!