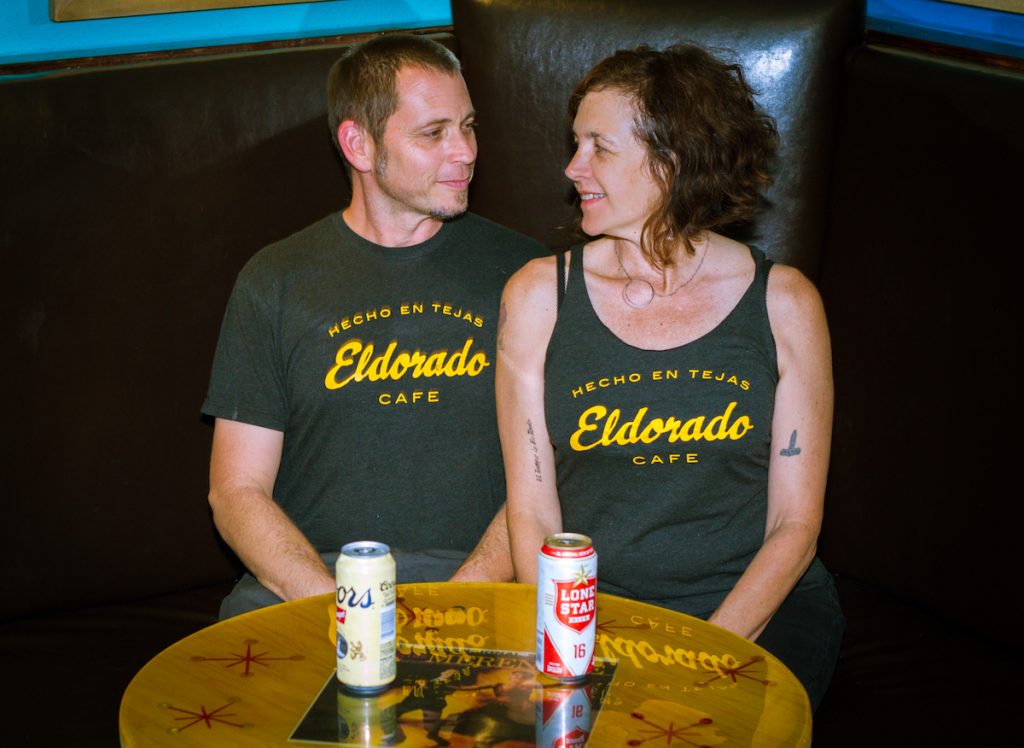 What prompted you to start your own business?

I was working as a pet sitter and Joel had a management position at a popular local restaurant chain. But we had talked about owning our own restaurant since our son was conceived. We had dreamed of him being a part of it but had put it off because of the comfort of a steady paycheck. I could see the dream drifting slowly away with each year and—for me personally—I felt my professional skills were deteriorating. I was ready to apply all my years in film production and catering towards something. And I wanted to see Joel pursue his dream. That’s hot!

Eldorado Café is hot! It was included in Austin Monthly’s list of Best New Restaurants in 2017! And y’all got a great review in the Austin Chronicle that summed up this way: “Eldorado Cafe is poised to be a neighborhood legend in no time.” You’re winning! What do you consider to be your biggest successes so far?

When we first came into the restaurant space, we thought that we would never be able to handle catering because the kitchen is small. But, we have been able to pull off caterings for up to 120 people. That is a lot. That is a huge accomplishment. Also, we didn’t know if we could find people to work for us because it’s a server’s market, but we have an amazing professional staff! We feel so fortunate.

How did you come up with the idea for your business? Tell me the story. Did you have a “Eureka” moment, or did your concept evolve over time?

Joel had always wanted a restaurant and was drawn to a more diner style of “all the food.” I saw that he had really been specializing in Mexican food for some time and had become known for it. One day, we were at this amazing restaurant in Hawaii, on the North Shore. It was a Mexican food restaurant and I had an epiphany that we should go Mexican. I think it was a good idea. He is super skillful at combining his gift of creating healthy comfort food with his knowledge of Mexican food—and what you get is delicious and unique.

When you told people you were going to open a restaurant, how did they respond?

Well, over the years, every time we brought it up, people would question the idea because the ride Joel was on was sweet and he was learning so much. We took it slow. First, we found a confidant, skillful business woman, Amy, to advise us. We had regular meetings with her. There were a lot of people who said: “Go for it!” but then weren’t really there to help when the chips were down. In the end, it didn’t matter. We had a large group of people who jumped onboard and totally supported us.

The naysayers were small voices. A random person telling us that we were too late to the game in Austin, someone saying that we wouldn’t make it because restaurants are hard. I had someone tell me straight up that opening a restaurant was a bad idea. That we were making a mistake. It’s funny because overall the naysayers were few in number but their voices had a tremendous weight on the ego. In the end, it made us want to prove them wrong.

What was your process for getting past the discouragement from the few naysayers and moving forward?

Stick our noses down and work hard. And turning our hearts and minds towards the multitude of people who believed in us. And as I mentioned before, Amy was a strong cheerleader. We just saw everything through her encouraging eyes. It also helps when your parents believe in you, and we had support from Joel’s mother and my mom and step-dad, Bob. That was huge.

How do you feel about your decision to open a restaurant now?

I am thrilled. When I walk around the space, I can’t believe it’s ours. People walk in and are wowed by the beauty of the design, thanks to our partner, David Wolf of Realm Construction and Anne Ducote, our designer. Our sales are great. Way better than we had projected. And I love the food! It’s delicious and fresh. Yes. Things are going amazingly well.

I feel more like a grown up. I do miss simpler times when we had more time to ourselves, but I know the investment now will pay off in the long run. I have made a new group of friends and watched kids who work for us grow up so much in such a short time. It’s nice to have this off the bucket list and in reality. We have a tremendous group of people working at the restaurant, and we are slaying every day!

What advice do you have for people who want to venture out on their own and start a business?

Be prepared to have doors slammed in your face over and over. Have a solid plan for how you will get your money and what you will do with your money. Don’t let anyone you don’t know handle your money. Assume your sales will be low for a while at first. Do as much pre-marketing as possible. Get people eating your food before you are open so you already have people talking about it. Make good food, be nice, be professional.