home / STARTicles / Passing HB660: What It Could Mean for the State of Texas

Passing HB660: What It Could Mean for the State of Texas 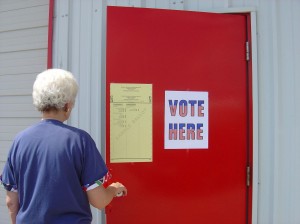 HB660 is currently waiting in committee in the Texas legislator. Whilst sounding like a form of LCD screen, HB660 is actually a bill to allow brewpubs such as BlackStar Co-Op and Uncle Billy’s to sell their beers in Texas Stores. The bill would also allow breweries to sell beers on site as wineries do. Obviously, this is the most important bill heading into 2013, and we as the loyal craft beer guzzling public must do everything we can to support it.

Who are the Main Players in HB660? 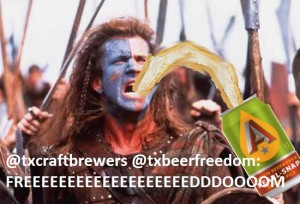 The passing of HB660 would have largely positive impact here in Austin. Looking at the backers of the bill, it’s easy to see that craft brewers are going to benefit the most. Texas Beer Freedom is the grassroots movement behind the bill, with the Co-owners of Austin’s Uncle Billy’s Brew & Que making up half of the executive committee. Also behind the bill is the somewhat medievally-sounding Texas Craft Brewers Guild that has provided the necessary studies and political lobbying to make the bill a reality. The Guild’s Board of Directors is comprised of a bunch of local brewers including [512] Brewing’s Kevin Brand and Live Oak’s Brian Peters, not to mention being headed by Real Ale head brewer and Austinite, Tim Schwartz.

But who’s against it? Well, here it gets a little more interesting. With its Sauron-esque all seeing eye, InBev used its political clout to flatten the bill in 2011, as the section concerning brewery tours favored breweries with less than 75,000 barrels a year. The legitimacy of this argument is questionable, considering the ubiquity of InBev products and the lack of consumer outrage at not being able to pick up some Bud directly from the brewery. What it really comes down to is craft beer’s increasing market share.

And finally we have the distributors and wholesalers. Their powerful lobbying group- the Wholesale Beer Distributors of Texas- has voiced support for aspects of the bill, but is still vehemently opposed to brewpubs being allowed to sell to distributors. I’ve summarized their arguments in a handy list format:

1. Passing HB660 would lead to a snowballing effect which would lead to some sort of “regulatory meltdown.” Just like Chernobyl, except without the radioactive wolves.

2. In the ensuing collapse of the three tier system (and presumably, American society as a whole), minors will be getting drunk on $10 four-packs of rare and seasonal beers sourced from brewpubs. Imagine the horror! 18 year olds playing beer pong with oak aged IPAs, oh my!

Why is this important?

Firstly, I’d like to address the beer distributor’s argument, and how it relates to how beer has been treated by legislators not only in Texas, but worldwide. Their view that relaxing restrictive laws on beer would cause a moral panic is extremely outdated, and ironically (considering their line of work) takes note from the temperance movement of old. The government shouldn’t view craft beer as a ‘sin product’, but rather a quality product to be enjoyed by adults.

The struggle to get HB660 passed should be highly concerning to any small business owner in the State of Texas. The restrictive laws have meant that Texas businesses can’t compete with brewpubs from outside the state; 92% of craft beers drunk in Texas come from Colorado, California Oregon and other craft beer hotspots. And whilst winning awards for their beer, no Texas brewpub has seen national recognition and success. According to this report, regulation is costing Texas 52,000 jobs and billions in taxable revenue. With the economy in the national spotlight, it’s bizarre that politicians aren’t doing all they can to help local businesses.

What Are the Chances of Succeeding? 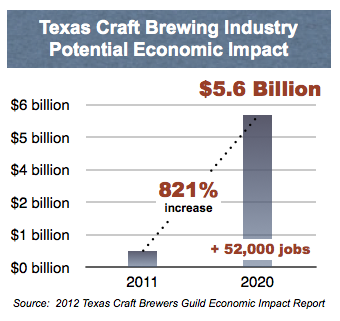 History is somewhat against the little guys, as similar bills have been crushed with some regularity in the past. However, this time the brewers have come armed with an academic study showing the insanely high amount of growth the craft beer industry could be capable of.

More encouraging is the fact that Jester King, a small brewery just outside of Austin won a legal battle against the TABC in which rather stupid, outdated laws were repealed under the 1st amendment. It shows that the ‘its tradition’ defense of old laws isn’t a viable one.

Could the tide be turning against Big Beer and towards the brew pubs? For the sake of small businesses (and the economy) in Texas, I certainly hope so.