home / STARTicles / The End of Net Neutrality: A Nightmare for Entrepreneurs and Small Biz?

The End of Net Neutrality: A Nightmare for Entrepreneurs and Small Biz?

The Federal Communication Commission’s plan to end net neutrality has turned the tech community activist, transformed the front page of Reddit, and caused the unsexy hashtag #netneutrality to trend on Twitter. But it has a lot of other people scratching their heads and asking, “What is net neutrality and why should I care?” 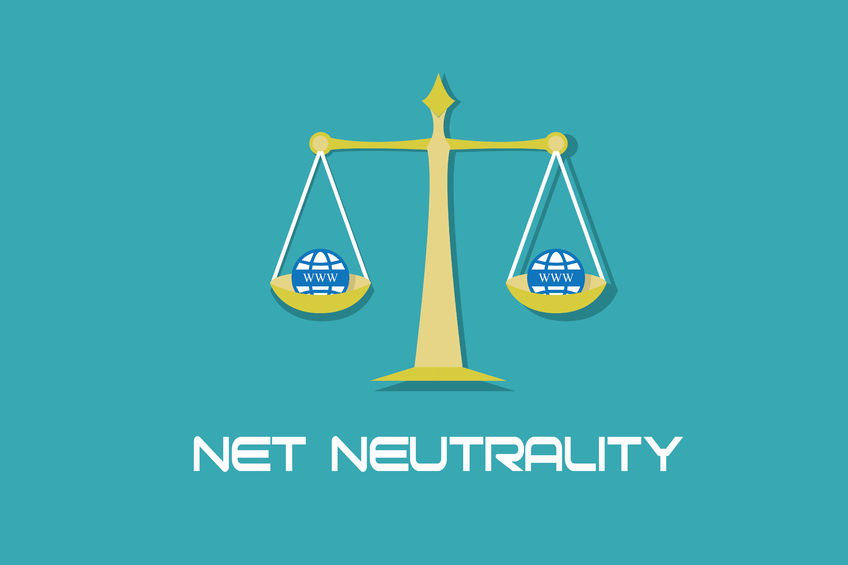 What is net neutrality?

Network neutrality is the notion that Internet service providers (ISPs) should treat all data that travels over their networks equally. This means that ISPs can’t block, edit, or discriminate against the information you and I share and access online, like the websites we visit or the applications we use.

Net neutrality rules prohibit internet service providers like Comcast, AT&T and Verizon from slowing (“throttling”) or blocking certain websites while prioritizing sites that pay for fast lanes. In principle, the rules protect equal access for every individual and business, thereby creating a level playing field that allows start-ups and smaller businesses to compete with large corporations.

Why should you care?

Critics of the repeal say that it would create a pay-to-play environment that would give too much power to a few giant corporations and that small businesses would suffer. Further, consumers fear that the repeal of net neutrality would allow ISPs to charge users more to see certain content and to control or censor what internet users could see and do on the Web.

In “How Changes to Net Neutrality Laws Could Affect Small Businesses,” Keegan Green explains it this way:

If ISPs have the ability to limit the speeds of our internet based on the websites or apps that we use, they will be able to charge each website for data prioritization. This prioritization would allow a website’s users to have high internet speeds while browsing that site. This idea seems incredibly similar to an old mob tactic where business owners have to pay the mob in order to operate a store in “mob territory.”

Proponents of the repeal, such as FCC Chair Ajit Pai a former Verizon attorney and Trump appointee, call net neutrality regulations “heavy-handed.”  They say that the rules hinder investment, innovation, and job creation and that the repeal could allow internet providers to offer faster, cheaper internet to consumers.

This view finds support from technology industry analyst and blogger Ben Thompson who argues that, while he supports net neutrality, he thinks the FCC is right to repeal rules that ban broadband providers from blocking, slowing down, or otherwise discriminating against legal content.

Wolverton goes on to say, “Not only was investment up overall, but so too were overall industry revenue and profits….”

What do small business owners and advocates say?

In August, the American Sustainable Business Council and others published an open letter to the FCC on behalf of more than 500 small businesses in the U.S. In the letter, they called weakening or killing net neutrality “disastrous for the country’s small business community.”

More recently, in a letter dated November 27th, 2017, Cyber Monday, the owners of more than two hundred start-ups from across the country—including Airbnb, Etsy, Foursquare, Github, Pinterest, Reddit, Shutterstock, and the Small Business Advocacy Council—sent a letter to FCC Chairman Pai. An excerpt:

Without these rules [ensuring net neutrality], internet service providers will be able to favor certain websites and e-businesses, or the platforms they use to garner new customers, over others by putting the ones that can pay in fast lanes and slowing down or even blocking others. Businesses may have to pay a toll just to reach customers. This would put small and medium-sized businesses at a disadvantage and prevent innovative new ones from even getting off the ground.

To get a better sense of how the death of net neutrality might affect individual small business owners now and in the future, I spoke with a professional in the field of future-oriented market research. Anne Boysen owns and operates After the Millennials, the only consultancy designed specifically to provide strategic market forecasting for the generation “sometimes called the Generation Z or the Homeland Generation.”

When we met at a local coffee shop, Anne leaned over her cup of cappuccino and described how she began her business by blogging and publishing content via her web site. During that initial start-up phase, she said, almost 100% of her clients found her through search engines like Google because, even though hers is a boutique firm, she listened to savvy advice and chose her url well. Traffic to her website steadily increased, and her site climbed higher and higher in search results.

However, starting a small business like hers from scratch might not have been possible without net neutrality. Net neutrality meant that Anne’s small start-up could compete with much larger consultancy and advising firms. Anne’s fear, she confided, is that the repeal of net neutrality would make it impossible for her to continue to compete with large corporations, as she has been doing. She worries that ISPs will sell greater access to large companies that can afford to pay for it, edging out businesses like hers.

Since she’s a futurist, who uses data and social science to forecast the future instead of tea leaves, I asked Anne to predict what would happen if the FCC votes to kill net neutrality.

She envisions two possible scenarios—one  dystopian and one utopian.

Trusting ISPs not to press their advantage, however, might be something like having the dingo watch the baby, concluded Anne.

PJ Christie, owner of Search and Convert, a company that creates personalized digital marketing campaigns for businesses of all sizes, is both more cynical and more sanguine:

Eventually I expect what we think of as the World Wide Web is going to be about as exciting and relevant as network television, with most people moving to decentralized applications built on blockchain or the dark web…. You can always count on entrepreneurs and the people who fund them to find opportunities in times of chaos and transition. It’s not impossible to imagine the current shift having an impact on my business, but I feel good about my ability to survive.

What can you do?

An FCC vote on the repeal of net neutrality is scheduled for December 14. If you would like to affect the decision—one way or the other—here are some things you can do.

2     Contact the FCC directly to let them know what you think about net neutrality.