What Microsoft’s Office for Everyone News Means for Mobile Customers 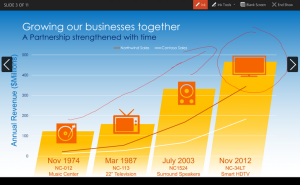 Microsoft made a surprising announcement at the end of 2014: it is releasing new and updated free Office apps – which include Excel, Word, and PowerPoint – for iPad, iPhone, and Android users. That means you can now create and edit Office documents without an Office 365 subscription.

The announcement comes on the heels of another bit of Microsoft news, a strategic partnership with Dropbox that integrates Dropbox and Office.

It might sound too good to be true that Microsoft would make so much functionality free, but the company has said it’s an extension of an existing strategy to make its already-free online apps accessible to mobile clients.

And while people using mobile devices will be able to access the Office apps for free, business users who work in OneDrive for Business or Dropbox for business will still need to pay for an Office 365 subscription.

Here’s what Microsoft says are the details of the new and updated apps:

Up until the November release of the new apps, Office for iOS users could view documents, share via attachments, copy and paste between documents, and present using PowerPoint. They can now create new documents and do some editing.

You will still need a subscription to Office 365 to access features like unlimited OneDrive storage, advance editing, Excel pivot tables, PowerPoint presenter mode, and color and design customizations. For users who subscribed to Office 365 solely to do use core features that are now free, Microsoft has said it will offer a pro-rated Office 365 refund.